Skip to content
Every so often I run across a series of stories that taken together make a much more interesting tale than reading them separately. That happened to me this afternoon when I found the following stories all open in my browser. What emerges is a cautionary tale for all big wireline providers….

First up was a story from USAToday—”DSL projected to lose out to Cable.” That article reported a projection that:

predicts that just 15% of all broadband users will have DSL in 2015 — half of its market share today.

The story is simple enough:

The problem for DSL, Anninger says, is that providers transmit data at only about 4 megabits per second. That can handle most of today’s tasks, including videoconferencing. But by 2015, most broadband subscribers will want at least 7 mbps — with many demanding much more — to serve homes where different people simultaneously use the Internet to watch videos, stream audio, make phone calls, download files and surf.

Frankly this isn’t new or much of an insight; it’s a shift that is already well underway. And it is gratifying to live in a place where the local provider is so ahead of the curve that its cheapest, lowest speed product has a speed of 10 mbps symmetrical today. But the idea that most of the country won’t be able to get 7 measly megs from their phone provider and so ditch the last pretense that real competition exists is pretty disturbing.

Cable profits are the envy of other industries. Adam Lynn, research manager for Free Press, said information from SNL Kagan shows cable companies had an average 38.7 percent profit margin in the second quarter of this year,

That’s from an article I ran across from a local newspaper in Connecticut, of all places. That level of profit-taking demonstrates that what the textbooks say is true: that duopolies are no better than straight-on monopolies from the cost-to-consumer point of view.

But what looks like a “good” news for cable companies is tempered in USAToday article by the closing lines:

Before the cable companies do a victory dance, though, they should consider this: More than 60% of FiOS and U-verse’s broadband customers in the survey said they are “very satisfied” with the services. Only 36% of cable customers were equally pleased.

Maybe offering video isn’t their salvation; that “cable” market may be about to disintegrate…and in fact, maybe it is already disintegrating. I recalled a recent story that calls into serious question the idea that video content rather than raw bandwidth will be the salvation of any company:

Netflix represents more than 20% of downstream Internet traffic during peak times in the U.S. — and is heaviest in the primetime hours of 8 to 10 p.m., according to a new report from bandwidth management equipment vendor Sandvine.

Primetime is no longer the province of “hit” network shows. It’s still when people sit down to watch TV. But increasingly they are watching netflix. Or Hulu. Or maybe Google’s YouTube. Incidently, Google was reported today to provide 6% of the total internet traffic. Much of that has to be YouTube’s fancy HD downloads.

There’s not a lot of comfort in the news for any incumbent…it’s all about the big pipes folks. 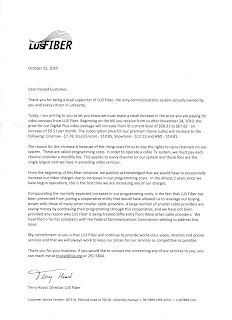 LUS Fiber will see its first rate increase as of November 24th according to a letter from Terry Huval. That letter was posted on October the 15th and is making its way to subscribers.

Only the prices for higher-end video services are being raised—phone and internet services are not. The letter I received mentions only changes to the “Digital Plus” tier (from $58.31 to $67.82 monthly) and to the premium movie channels, Cinemax (to $7.78), Starz/Encore (to $10.85), Showtime (to $12.11) and HBO (to $14.81.) The Digital Plus tier is LUS’ most extensive and highest priced offering. It seems that the lower-priced tiers are not changing at this time. [Update: Amanda McElfresh at the Advertiser has the fuller story in a short piece posted in the afternoon of 10/18; there she notes that all the video tiers were being updated:

It will have been about 22 months since LUS first began service when these initial increases show up on peoples’ bills; November is a somewhat traditional time to see cable rate increases and generally they come in yearly—or such was my experience while I was on Cox. (Cox’s most recent rate increase was 11 months ago in November of last year; that included increases throughout Cox’s video offerings and price increases to its internet offerings as well.)

LUS explains the changes as a consequence of the rising costs of programming, complains that it has been shut out of money-saving deals by its exclusion from potentially money-saving deals available to members of a cooperative of small providers. Readers will recall that there was quite an uproar about The Nation Cable Television Cooperative (NCTC) not too long ago—LUS has filed a formal complaint with the FCC and while it is not mentioned in the letter to its customers LUS, in both its filings and its public messages basically blamed Cox. Cox joined the coop after the fiber referendum where LUS won the right to build the system. Cox’s new membership in one of the nations largest cable systems was highly unusual for the organization—which originally was formed to allow smaller operations to compete with huge corporations like Cox. Cox now has a seat on the board. The whole thing smelled even odder after the two other municipal fiber utilities that had originally been denied membership along with LUS were admitted after joining in the preliminaries to the FCC complaint. The only visible difference between LUS and the other two cities was that Cox was competing in Lafayette—and not in the other two cities.

National News Connects…
While the ongoing battle over Coop membership surely played a role, it’s unlikely that price increases could be put off indefinitely. Video programming is simply expensive, and getting more expensive yearly.

For instance, technology and business news on the internet was rife with stories about how the Fox network was locked in a showdown with cable giant Cablevision over the upcoming programming contract. Fox is allegedly more than doubling in price this year from 70 million to 150 million and Cablevision is refusing to go along. Fox’s channels all went dark today exciting angst from sports fans. But what roiled the internet was that Hulu was briefly forced to cut off internet access to Fox shows for Cablevision customers—and only for customers of Cablevision. So if you bought your internet connection from Cablevision you couldn’t get last weeks programming from Hulu….even if you used AT&T or the DishNetwork for video. That didn’t last long, Hulu was allowed to open up access again rather quickly. But it raises real network neutrality issues. But perhaps more importantly, Fox was willing to flash the knife in this conflict, showing the cable companies that it controlled internet access to its programming with the implicit threat that it could go over the head of the programmers at the cable companies and take its content directly to users if it so chose. Large pipe internet connections have started to shift the balance of power between content providers and the cable companies. We may have just seen the first shot in a war that makes cable companies much less powerful. Many people anticipate that cable will not be able to avoid being cut out of its powerful—and profitable—role as the necessary link between consumers and producers. The Fox network just fired a warning shot across the bow of not only Cablevision but all of the national cable companies.

Update 10/19/10: The Advertiser has posted the official, it’s-in-the-paper version of the rate increase story…